opinion: “Crazy” is Not a Synonym for “Awesome”– notes on semantics from a Mental Illness Survivor 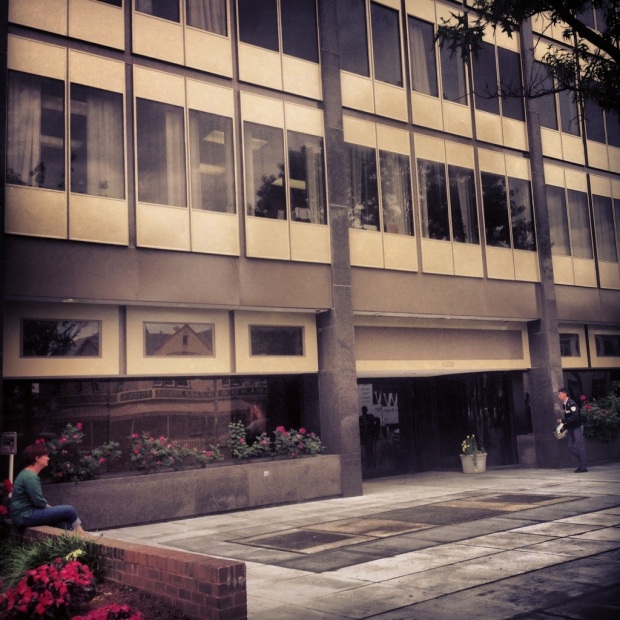 You wouldn’t know it if you just walked by it today, but this building houses the Psychiatric Institute of Washington. Back when I “did time” there almost a decade ago, anonymity was not an option: you had to walk past big signs and under an awning that clearly spelled out the stigmatizing name of the place. Inside, you were maybe strapped down, maybe isolated in a padded chamber with clear windows, maybe asked to color in some stupid stencil with unsharpened crayons, probably treated as subhuman because of your condition, probably warned that you’d forever be a burden on your loved ones and strongly advised against ever having children, definitely denied all hope of full recovery, and definitely overdrugged.

During my horrific and humbling experience at PIW, I realized I’d have to fight every day for the rest of my life to earn back my legitimacy in “sane” society, especially if I wanted to take creative risks in my artistic output, or generally take a road less traveled by…

As the editor of a prominent literary journal told me a few years ago, at a summer workshop in the midwest: the bio/artist statement required alongside poetry and story submissions serves “mostly to weed out the crazies”.

“Please weed me out because you dislike my poems and stories,” I wanted to say, “not because I’ve led an unconventional life as a survivor of mental illness.”

But I didn’t say anything at all, because at the time I had no hope that mental illness stigma would ever diminish in my lifetime, and really only half-believed in my own recovery from mental illness: according to every psychiatrist and textbook I’d ever encountered, full recovery from my former condition was by definition impossible. I only hoped that some day I’d be able to write a truthful bio/artist’s statement that reeked not-at-all of “crazy” to the gatekeepers of the various artworlds I wished to enter.

Whatever the causes of my particular symptoms, I was truly mentally ill in my late teens, diagnosed Bipolar I with severe recurring psychosis and several suicide attempts (was even a misguided subject of MTV’s True Life: I’m Bipolar at age 18…), but thanks to a will of iron, a solipsistic bent perhaps, and certainly a great deal of luck, I’ve now been med-free and quite sane and functional for almost ten years. “Hyper-sane”, several friends and collaborators have even remarked! I’ve worked extremely hard to earn this societal trust, often these days taking on “insane” amounts of responsibilities (emotional as well as practical) in order to ensure myself of my ability to withstand stressors of all kinds without ever losing touch with reality or falling out of love with my life.

Naturally I’ve felt sad, angry, hurt, impassioned, playful, guilty, nervous, annoyed, devious, and bored (rarely)–and as an actress it’s been my job to continue to explore my emotional range–but never “out of control” since my recovery ten years ago (though I thankfully do not suffer the delusion that any human is ever fully “in control” of his little half-random life!). And I’ve gone through some pretty stressful crap over the last decade: violent hate crimes, coerced abortion, miscarriage, Columbia University, the uncertainty of creative freelancing New York City 🙂 and a violence-threatening stalker to name a few…

Nonetheless, my fear of losing my mind still lingers, superseded only by my fear of the loss of agency that another institutionalization would entail. As I continue endeavoring to earn my keep as a trustworthy friend, daughter, sister, lover, employee, employer, co-worker, co-creator, fellow citizen of the Artworld broadly defined to include the performing arts, film, and recorded music… it pains me regularly to hear people throwing around the word “crazy” as though it were a synonym for “good/cool/awesome”:

“Come to my show tomorrow night: it’s gonna be crazy!”

“Your stage presence was insane! I was floored by your last aria!”

People, friends, art-lovers: I know you mean well, and are usually just enthusiastically embracing non-conformity and just plain awesomeness with these kinds of expressions (thank you!) but there is actually nothing fun or enticing or awesome about real-crazy. Please try to stop inadvertently glamorizing it.

If a real crazy-survivor is now out in the world peddling her art, his craft, chances are high s/he does not want to hear that the fruit of her/his creative labor is perceived as a symptom of her/his laboriously-overcome mental illness. We are secretly terrified that our too-ecstatic trombone solos, too-disfiguring nude paintings, too-neologic process-poems will land us back in the no-agency hope-killing loony-bin hells of our pasts. Many of us would rather give up all hope of worldly “success” than risk being branded as “crazy” artists. Nor do we want to go to a show where a bunch of sanity-privileged bored people use drugs alcohol and/or some artistic medium to get into a mental state we’ve been diligently cleaning out of our systems for years.

Of course you want to let loose at your concert/show/salon/party, of course you want to focus on the present, rejoice in silliness, in the absurd, in free-association, in all those wonderful gifts the arts give to human experience, to society, without which we’d all be automatons or burned at the stake for witchcraft! But can we please agree to call it something other than “crazy“, for those of us who are still nursing our pretty bad 2nd degree burns from said flame-engulfed stake? How about Freedom? Freedom is nice. “Come to my show tomorrow night: it’s gonna free your soul!” Yeah I know, sounds a bit corny… But you get my gist I hope: there must be some alternative state of liberation from The Man, from The Predictable, from The Tried and True and other Oppressive Norms that we can all celebrate without rhetorically invalidating the vividly painful crazy-memories and crazy-ongoing-experiences of actual mental illness survivors. Let me know what you come up with!

Mental illness stigma, though less severe than a decade ago, is still so strong that most mental illness survivors remain at least half-closeted, so you may know a few without knowing that you do.

For them, and for me: thanks for reading, especially if you’re “crazy busy”… 😉

Have a heartening day full of happy surprises and sudden bursts of clarity and peace.

PS. If you are going through a “crazy”-feeling crisis of sorts right now, I wish you a therapist like this one (my friend in Florida/anywhere), or anyone with this kind of approach (don’t know him personally, but respect his approach, NYC). If you are a fellow survivor of mental illness/ the broken psychiatric system, or just plain interested in further exploring the subject of recovery from mental illness, consider getting involved in/supporting organizations such as Open Paradigm Project or MindFreedom, or Mad In America…

← sketchbook: spacebar protecting me from the computer demons/ what I want film critics to tell me
my photo showing in the Last Brucennial: “She works from home in the mornings” →